SIRENS: helping Ukraine and people affected by the war 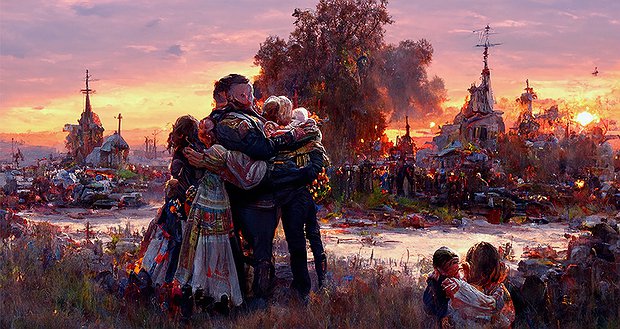 The first thing many Ukrainians heard across the country in the early morning of February 24th were air raid sirens. Unfortunately, the sirens going off meant that everyone’s worst fear became a reality – Russia had started a full-scale invasion of Ukraine.

Now, it’s been more than 2 months since the beginning of the war. Thousands of people died. On top of that, hundreds of residential buildings and objects of critical infrastructure were destroyed. The humanitarian crisis is unfolding before our eyes. We want to help beat it.

roject is AI-based. We created a neural network pipeline that generates art from the text description. Then we made a chronology of the most significant events of the full-scale Russian-Ukrainian war, described them, and used this as input for the neural network.
With this technology, we created 1 991 works of art, depicting 150 important events of the Russian war against Ukraine, exhibited at the Sirens Gallery and available for purchase as NFTs.

Goal: our main goal is to organize an NFT sale to raise money for war victims. We want to praise the courage of Ukrainians and preserve the history of this war in the blockchain forever. 100% of money from NFT Sales will be donated to the biggest Ukrainian charity fund dobro.ua Their crypto wallets are integrated into a smart contract of the NFT sale, meaning the money will be transferred to their fund directly.

By purchasing Sirens Gallery NFTs, you are helping to rescue children and adults that are suffering from the war in Ukraine and are forced to remain in danger or flee the war zone.

Assistance will be provided to:
- children and their families who have been forced to flee combat zones, including those who now live in shelters for internally displaced persons;
- elderly persons who could not escape the war and were left alone with misery and hunger;
- people in occupied and deoccupied cities and towns across Ukraine that are currently on the brink of humanitarian catastrophe;
- hospitals that provide help to adults and children affected by the war.

Now everyone of us can help Ukrainians. Your donations are their chance to survive!